A memorable mountain bike tour in Sicily.  Explore the hidden beauty of the island while cycling from one wonderful location to another with breathtaking views along the way.
A journey from Mount Etna to Capo Passero, the extreme tip of Sicily and Europe, cycling on trails that are semi-deserted, surrounded by nature with some single track included, passing through small Sicilian villages giving you a taste of local village life.

Arrival at the airport and transfer to the hotel on Mount Etna. Dinner and overnight stay.

Meet your guide and depart to explore her majesty Mount Etna, the highest active volcano in Europe. You will cycle through ‘fields’ of lava rock and will notice how the black surroundings are suddenly interrupted by the rich greenery of the thick pine forests and chestnut woods. This will be an unforgettable experience on your mountain bike!

Starting at Piano Vetore (on the southern side of Etna) we will head towards the northern side, along the beautiful Pista Altomontana. You will pass several lava stone mountain huts on the route and the lava sand and at times rocky terrain will put cyclists and their bikes to the test. 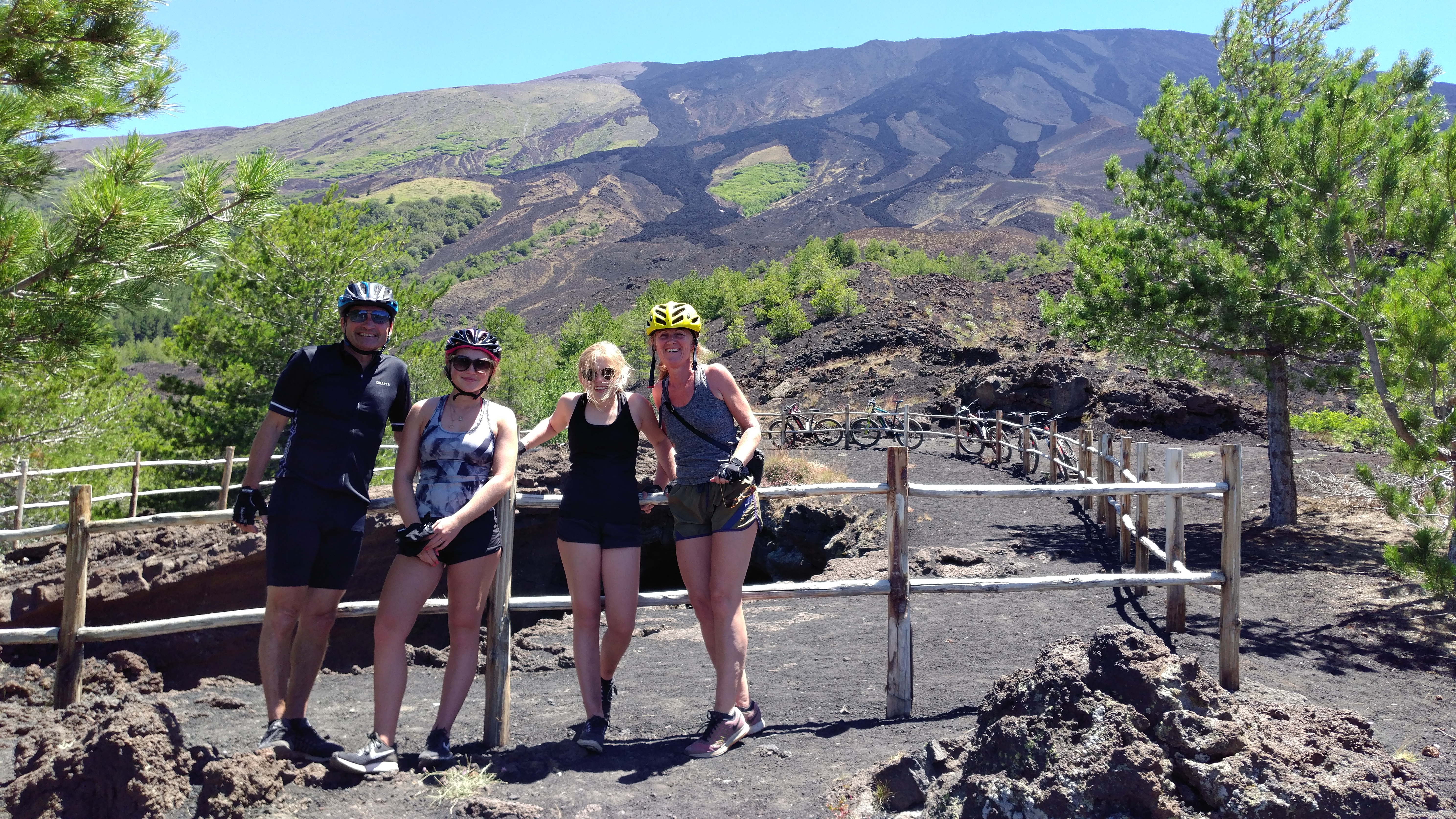 Mount Etna is a living mountain that ‘breathes’ and you will often hear the ‘voice’ of the volcano in the background while cycling along the Pista Altomontana. This will be an unforgettable ride, up to Pineta Ragabo and down to Milo, where we will stop at a mountain lodge for a delicious dinner and the first overnight stay.

Third day: From Etna to the Alcantara Valley 50 Km with 700 metres of total ascent

From Mount Etna (North side), we will ride down the River Alcantara valley towards Castiglione di Sicilia. We pass by the medieval Randazzo and its beautiful churches and head towards the Alcantara Valley and the Ionian Sea along an ancient Roman road, known today as the ‘wine road’ due to the many wineries in the area.

We cycle down along the river towards the town of Castiglione di Sicilia, where we will stop to admire its imposing Castle, built on an ancient Greek fortress, a beautiful building dominating the entire Valley.

Fourth day: Alcantara Valley -> Sea and back 60 km and 930 meters of total ascent

Leaving the Agriturismo we head for the Cuba Byzantine, an ancient Byzantine chapel of the 7th century. Just 200 metres away we may stop a while by the small waterfalls of the Alcantara river.

After The Cuba, through an off-road route, you can admire the wonders of the Valley, where the Alcantara river has carved out its bed, creating at the end of its course a fracture between two basalt walls: the famous Alcantara gorges. The structure of the walls, which are tens of metres high, is characterized in some places by colonnar structures that recall aligned “organ reeds”, elegant “fans” and ordered “stacks of wood”. The river environment, between lakes and waterfalls, is mainly characterized by Mediterranean scrub.

We will follow the river up to its mouth to the sea, at the San Marco beach, where we will have, if possible, a nice bath in the Ionian Sea.

A nice ride along the sea, going south, will take us to the Natural reserve of Fiumefreddo river, before heading back uphill to the Agriturismo.

The route, characterised by trails, away from traffic and ancient “trazzere” or country roads, will make us discover suggestive corners. In gradual ascent, we will go to the discovery of ancients Sicilian Masserie o farmhouse, Norman bridges and above all the Alcantara river.

Fifth day: From Sortino to Palazzolo Acreide through the Anapo Valley – 48 km and 850 metres of total ascent

We leave the Alcantara Valley and we get transferred with a comfortable van towards the South, to Sortino. We get on the bikes in Sortino and we cycle towards Ferla, through the Giarranauti forest which is on the upper part of the Pantalica plateau. The area, besides having a beautiful pine forest, is also rich in evidence of the past, in particular from the Byzantine era. We will cycle along gentle slopes and on white roads bordered by the characteristic old, dry-stone walls of the Iblei mountains. These walls were built to delimit the pasturelands and property boundaries in the past.

Upon leaving the Giarranauti forest, we will arrive in Ferla, a spectacular, small town in the Iblei mountains. Although less well-known than the more famous town of Noto, you will see beautiful examples of baroque churches here too. 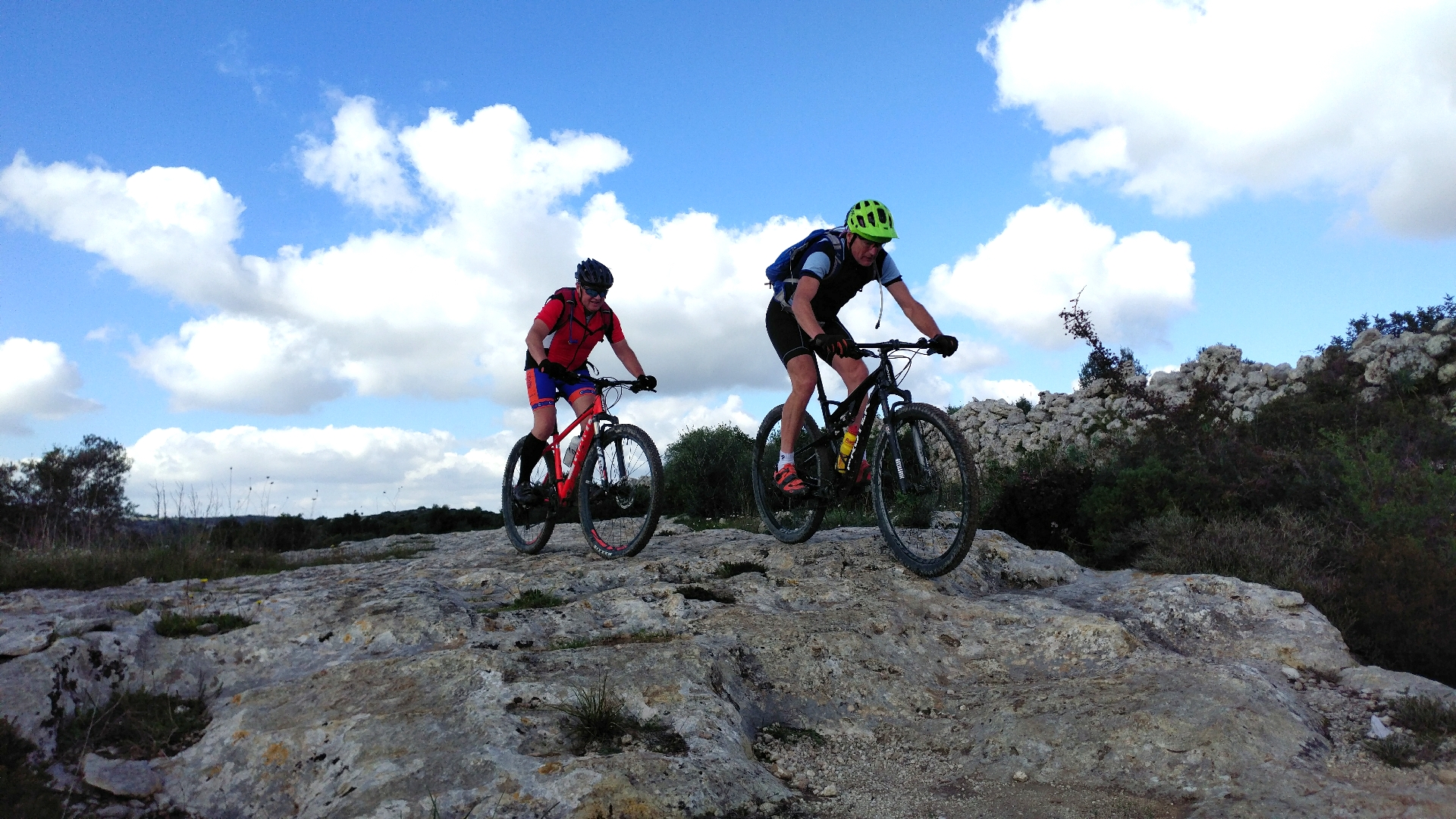 After a short stop in Ferla, we will cycle downhill towards the bottom of the valley and enter the nature reserves of the Pantalica and Anapo Valleys. The old railway track which was built at the beginning of the 1900s was converted into a cycle path and runs through the valley next to the Anapo river. You will have plenty of glimpses of the natural beauty of nature, characterized by the remarkable floral biodiversity in the valley.

The track will lead us to the gates of the town of Palazzolo where we will stop for dinner and an overnight stay.

Sixth day: From Palazzolo to Noto, 57 Km and 750 metres of total ascent

We will cycle from Palazzolo towards Noto, through the beautiful landscape of the Iblei Mountain plateau.

We will pay a short visit to the baroque town of Palazzolo Acreide, a UNESCO World Heritage Site and named one of the most beautiful villages in Italy.

Founded in 664 B.C. by the Greeks of Syracuse, Palazzolo Acreide is renowned for its numerous monumental churches, two of which, the church of San Paolo and the church of San Sebastiano, are UNESCO World Heritage Sites.

After Palazzolo, the route will take us in a south-easterly direction, through rural paths characterized by the typical white limestone of the Iblei Mountains. We will cycle through fields of Mediterranean scrub bordered by dry-stone walls where it is not uncommon to come across wild herbs such as rosemary, oregano and sage growing.

Before arriving to the outskirts of Noto, we will pass through the small hamlet of Testa dell’Acqua, from where the descent towards Noto begins. Near the baroque town you will stop for dinner and an overnight stay.

Seventh day: From Noto to Noto Antica and to the deep south, 60 Km with 700 metres of total ascent

We will start the day with an uphill cycle to the small town of Noto Antica, passing through fields of almond trees and typical Mediterranean scrub. We will face the only challenging climb of the day which will take us to 400 meters asl to the ruins of Noto Antica, the ancient city of “Netum” on Mount Alveria. This is the original town of Noto which was destroyed by the earthquake in 1693, causing the new Noto to be built in baroque style lower down in the valley. The ruins help us to imagine the magnificence of the ancient city, nestled at the intersection of three valleys and made impregnable by numerous walls and deep caves. 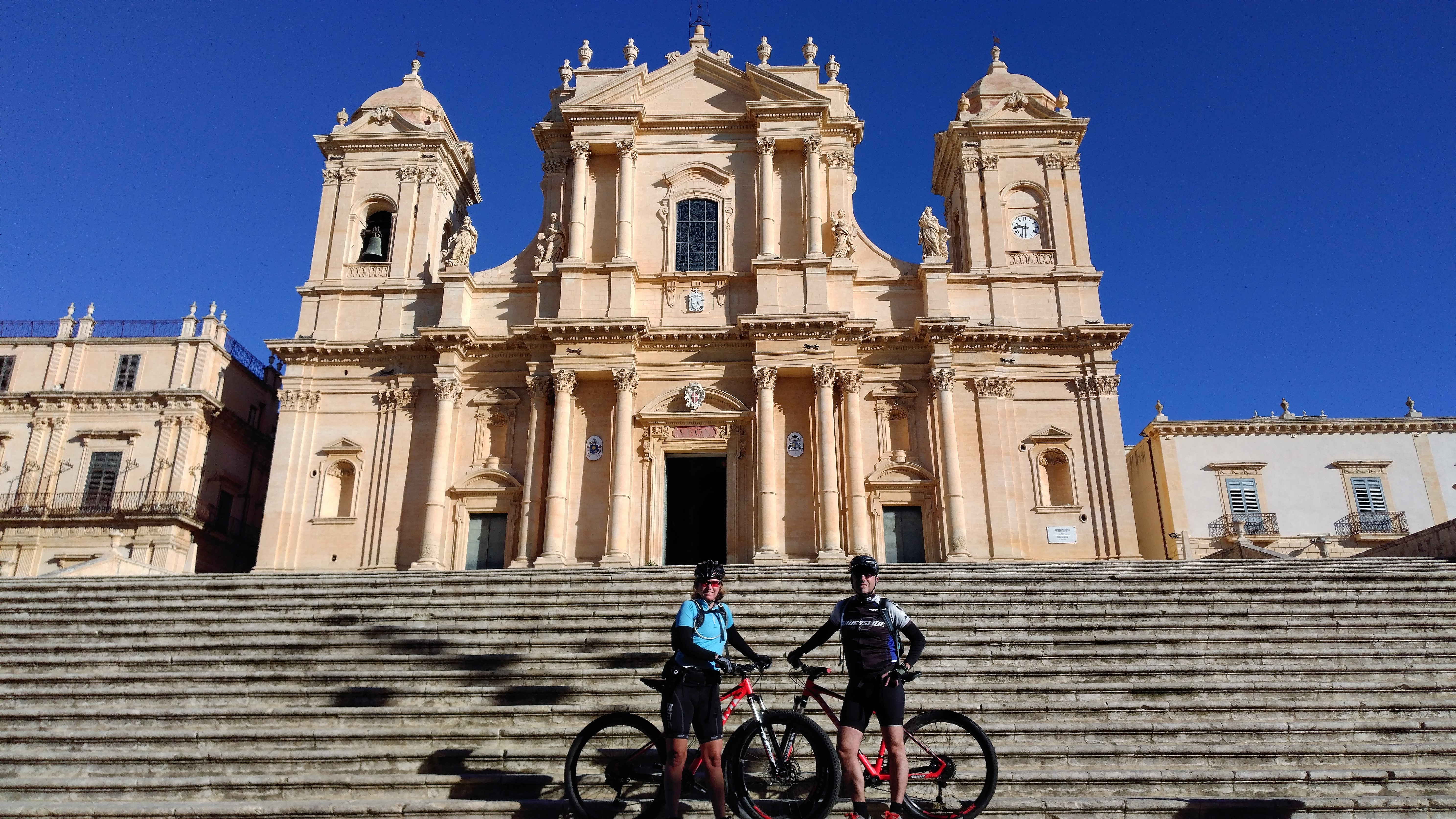 After cycling through ancient history, we will return downhill towards modern Noto and proceed through the most important and picturesque streets of the town whose baroque churches and buildings are part of UNESCO World Heritage since 2002.

We will then ride down to the sea and the white sandy beaches of Eloro before turning south, towards the extreme tip of Sicily and Europe. We will cycle along the Ionian Sea, passing by the beautiful beaches of Vendicari and San Lorenzo, before arriving at the delightful fishing village of Marzamemi. If you are a fan of the Inspector Montalbano books and tv series, you will, no doubt, recognize places where some of the episodes were filmed. At the end of the ride, a refreshing almond granita is a must to finish off a great day of cycling. Dinner and overnight stay on site.

Bike tour with our qualified ITA/ENG guides, to get the best of your mountain bike experience. Costs are per person based on a minimum of 4 people per group, in two double rooms when included.

Independent, free to take your time and enjoy the bike experience at a pace that suits you. Follow an accurate GPS track to discover the delights of your bike ride. Costs are per person based on a minimum of 4 people per group, in two double rooms when included.

Medium level excursion or tour on off-road trails with long challenging uphill parts and short technical uphill and downhill sections. Suitable for fit cyclists who have done similar trails in the past.

Season: from March to November

What to wear and bring with you:

A small backpack/rucksack for your personal items (you can leave this in the van if you don’t want to take it with you during the excursion).

A change of clothes in case it rains

A camera or smartphone if you want to take photos

A spirit of fun and adventure

Our tours are carried out in collaboration with

Our first mountain bike tour exclusively designed for e-bikes. An epic three days ride with e-bikes from the Sea to the top of Mount Etna. A unique ad

Take a tour through the wonders of southern Sicily. Explore an area of unspoilt nature which is rich in history, art and culinary traditions. This tou

Experience the magic of a sunset ride on and around Mount Etna, Europe's highest active volcano, ending with a delicious Sicilian dinner in a mountain
Find out more